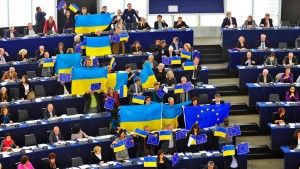 An EU bill allowing Ukrainians into the bloc for short stays without visas has been overwhelmingly backed by the European Parliament. Amid the conflict with Russia, the deal is a show of closer EU-Ukraine ties.
The European Parliament on Thursday voted overwhelmingly in favor of enabling Ukrainians to travel to the EU without a visa. The proposed bill passed by a 521-75 margin - with 36 abstentions.
Ukrainians who have biometric passports would be authorized to enter EU countries, except for the UK and Ireland, without a visa for 90 days in any 180-day period.
Ukrainians will also be able to access non-EU countries Iceland, Liechtenstein, Norway and Switzerland without a visa.
Read: Ukraine slams Eurovision amid feud with Russia over entrant
"Great day for the people of Europe and Ukraine," said Anna Maria Corazza Bildt, a Swedish member of the EU parliament. The legislation must still be formally approved by individual EU member states and should come into force in June.